Woven wire mesh is one of the most versatile solutions in the world of filtration, as it can be  formed to fit any operation. While there are other filtration solutions out there, such as perforated sheet metal or wedge wire, formed wire mesh provides efficiency that is simply unmatched.

So, how are customized mesh components formed?

W.S.Tyler has worked with woven wire mesh for over 100 years and is equipped with the tools and know-how needed to produce formed mesh solutions that are customized to the needs of its customers.

This article was written to provide insight on what formed mesh is, the process needed to form mesh, the common mistake you should look out for, how it’s used, and the limitations surrounding it.

What Does It Mean to Form Mesh?

When you hear the term formed mesh, it is referring to the process of taking a sheet or roll of woven wire mesh and converting it into some sort of part or fabrication that maintains a specific shape. These shapes can be virtually anything; it just depends on the needs of your operation.

To form woven wire mesh, we first start with a sheet or roll of woven wire mesh that matches the wire diameter, mesh count, and micron rating specified by the customer. In order for the mesh to maintain the desired shape, the mesh is typically heat-treated through either an annealing or sintering process before being formed. 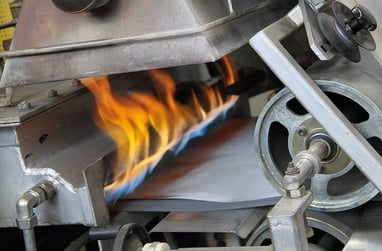 The mesh is then cut into more manageable sizes then formed using a tooling method, a punch and die, or press brake.

The actual process of forming mesh is fairly quick. In fact, hundreds or even thousands of parts can be formed in as little as an hour, depending on the techniques being used.

To that end, production time can range anywhere from one to four weeks, depending on a handful of factors, such as the availability of material, the detail needed to form the part, quantity of your order, etc.

What Are Some Common Mistakes When Forming Mesh?

As most forming methods are one and the same, there are a handful of things customers should keep an eye out for when working with formed mesh.

For example, it is widely known that while the annealing and sintering processes are crucial, they are accompanied with add-on costs that manufacturers may try to avoid. If these heat treatment methods are omitted from the forming process, the finalized formed piece will be significantly less effective.

If you notice that your formed mesh does not hold the desired shape, this is a key indicator that it was not heat treated properly or at all. This needs to be addressed immediately as the mesh will not function properly, which will have a noticeable impact on your operation.

Unfortunately, this does more harm than good in most cases. In fact, over forming mesh often deforms it in a way that renders the part unusable. Even if the piece can be salvaged, odds are the lifespan of the piece will be shorter than expected.

So, if you notice that wires are damaged in any way along the seams or creases of the formed mesh, there is a good chance that the manufacturer over formed the mesh and damaged it.

What Limitations Does Formed Mesh Have? What Can’t Be Done?

As stated above, mesh can be formed into virtually any shape to help facilitate your operation. As good as this sounds, forming mesh does not come without its limitations.

For example, when forming deep drawn parts, a flat sheet of mesh is drawn to take on a
bowl-like form. During this forming process, it is important that we pay attention to how deep we draw the mesh as there is a ration based on the diameter of the part that dictates how deep the part can be drawn.

This ratio prevents the depth from having a larger measurement than the diameter of the part. So, let’s say you have a part that is one inch in diameter. That part cannot be drawn out five inches deep, as there is simply not enough material to form that cavity.

On the other hand, a part that is four inches in diameter can be drawn to a depth of one inch with ease.

How Is Formed Wire Mesh Used?

A great example of formed mesh being used in a filtration-based application can be seen in the auto industry. Many automotive manufacturers use formed mesh in the oil pick-up tubes in car engines.

These pick-up tubes are key to the functionality of the car, as they are designed to feed oil from the oil pan to the engine. While this is a very important function, it is also important that no debris or impurities in the oil enter the engine and damage it.

This is where the formed mesh comes into scope.

Manufacturers attach a formed mesh screen at the ends of these pick-up tubes to filter out all the dirt and impurities that make their way into the oil pan over time.

Now, formed mesh can also be seen in our extruder screens and premium sand control screens; however, the list of applications that can benefit from formed mesh goes on and on.

Expand Your Knowledge on Formed Mesh

Forming mesh refers to the converting of a roll or sheet of mesh into a shape that is custom to the needs of the customer.

It is important that you look for common faults, such as mesh that was not heat-treated and mesh that was over formed, as these common mistakes can have a negative impact on your process.

And while formed mesh is used to handle a wide range of filtration-based tasks, there are several limitations that come with it.

Here at W.S. Tyler, we understand that formed woven wire mesh provides versatility and efficiency that other solutions cannot compete with. This is why we are dedicated to providing industry-leading solutions.

To ensure you are working with a formed mesh solution that is producing the best possible results, download and review our Woven Wire, Fabricated Parts & Customized Filters Learning Guide for more information.

Let Us Know What You Thought about this Post.

Epoxy vs. Solder: Which Is Best for Your Test Sieves?